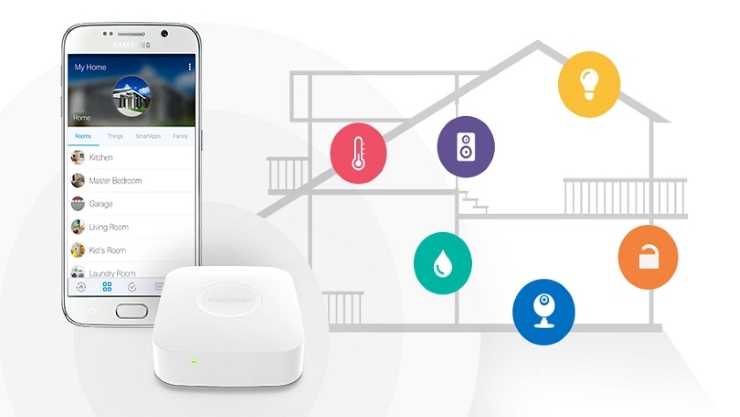 I recently moved house over the Christmas period and in my new residence there was no security system installed. Having an over protective mother, meant that a home security system was high on my agenda list.

I began looking into alarm systems, but with a tech background I went a little further than others and ended up stumbling onto home automation systems. Now I’ve always been fascinated by technology so I became curious as to how affordable it was and how easy it was to implement.

After doing extensive research (as I do when I purchase any tech goods), to make sure it did exactly what I wanted and being somewhat future proof. I finally choose the Samsung SmartThings system which seemed to cooperate with many different brands, allowing flexibility when adding different products.

I went to Curry’s (who seem to have secured the rights to be the sole distributor) and brought the starter set for £200. This contains the following 5 items: 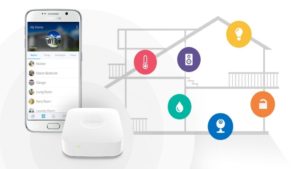 As any gadget geek would be, I was excited about putting it all together and seeing it in action. I plugged in the smart hub and followed the instructions with ease. I connected and named all the devices using the well-designed app.

I positioned the motion sensor in my hall to trigger when movement comes through the front door. This also covers the stairs and lounge door so is a focal point in my house. I placed the door sensor albeit with a little difficulty on my back door (this was due to the door frame and door not being flush). I angled it together but it still connected fine on the app. The Smart plug was used for my lamp in my lounge which could turn on when the plug was activated.

After getting everything set up (and playing around turning the light on and off) I started to delve into the app. This allowed me to configure routines such as waking up, going to bed, leaving the house and coming home. An example of something I set up was when leaving the house turning everything off and arming the alarm. I also configured the alarm to trigger at 11pm (when we get into bed).

I actually couldn’t wait to leave to go to work the next day as I wanted to see the alarm set and see the responses. Surprisingly the solution worked smoothly first time and even my light turned on when I arrived home.

After a few months of testing there are still bugs and little issues that need ironing out, but overall I was very pleased. There are issues such as the alarm deactivating when you are a few streets away from the hub. Another issue which occasionally happens is when things don’t turn on when they are supposed to. However, Samsung seems to update its hub regularly so it seems most issues will be attended to over time.

I’m amazed by the potential of the product and can’t wait to test out other compatible devices and write posts about them. Hopefully it will help show you a smarter way to live.